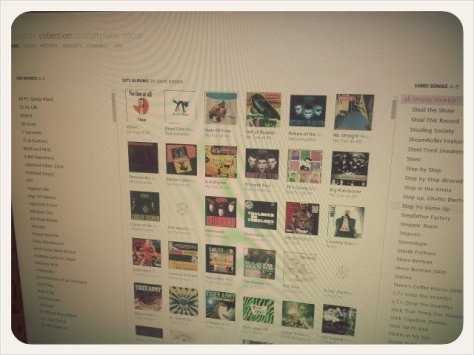 I have a seriously ridiculous amount of music on my computer right now, well over 200GBs. I listen to music all day long: when I wake up, when I draw, in the car, or when I’m tattooing, it doesn’t matter, some sort of music is always playing with me. That why one of the best gifts I ever got was this Zune player I have, I love it.
As it stands, I have 14,902 songs in my Zune collection. It’s an obsession that started at a young age and despite all my car breakins, computer crashes and set backs I finally have a solid music collection that I am semi-proud of.
I can’t honestly tell you what band got me into loving music how I do, I’d have to say a lot of different types of exposure over a long period of time. I was classically educated and my parents were always playing classical music or NPR in the house, so that’s where I pretty much started. I remember really getting into 90s punk rock when I was around 16 and had cassette tapes of NOFX, Bad Religion and The Nekromantix. I started going to a lot of shows in Pittsburgh when I was 17 and it was all downhill from then. I was regular at every show in Pittsburgh til I was 20 or so, then I moved to Youngstown, OH and started my tattooing life, which ate up a lot of time between working a full-time job and doing a one year unpaid apprenticeship.
When I was 22 started hanging out with this metal chick and she introduced me to all types of hardcore. From there I started hanging out in Cleveland’s metal scene and found a lot of bands that I really got into such as Misericordiam, Dead To Fall and Ignite The Will.
I had always pretty much despised all types of mainstream rap, well I still do, but I used to really hate it. I loved underground rappers such as Necro, Ill Bill and Sage Francis, it seemed to me that those guys were doing it harder than anyone else anyways, so why even listen to the other stuff. Then I moved to DC and was accosted with terrible rap, however I met a few people who listened to real underground rap and was introduced to what I think are some of the greatest rappers who ever picked up the mic, rappers like Slaine, (early) Cage, Vinny Paz and Slugg. While in DC I also was introduced to some real dubstep and listen to a lot of that when I am drawing or painting, I think it helps me either: really stay focused or amps me up enough to where I don’t care about anything else but what I’m doing.
Anyway, just to prove the randomness of it all, I’m going to list the next 10 songs that play on random:
1. VagiClean, by Mr. Oizo
2. Let Them Eat War, by Bad Religion
3. 30 Years (LIVE), by Aus Rotten
4. My Life, by The Exploited
5. The Gallow is God, by The Distillers
6. Strange, by Tech N9ne
7. vengeance, by Converge
8. I’m Feeling Slightly Violent, by Anti-Flag
9. Never Going Back Home Again, by Elmore James
10. Accidents Don’t Happen, by El-P

This site uses Akismet to reduce spam. Learn how your comment data is processed.